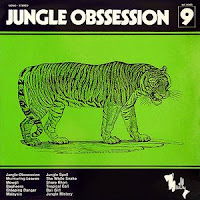 Here is a new psychogeographic review, of Nino Nardini & Roger Roger "Jungle obsession", a magnificently mellow exotica album, highly recommended if you've never been anywhere near the jungle and don't have your own airplane, you plebs, ha!

Also, for those of you readers who wish there were links to/ facts on the music reviewed here, there is a simple reason I won't allow that, and that is because it will take you around one second to run a search and find out all you need... I write this collection, The Map, for those who like to wander; adding links to everything would rather go against that now, wouldn't it?

The Map is an ongoing collection of psychogeographic reviews of favourite pieces of recorded music, albums or otherwise. As I fail to find any relevance in reviewing music through the lenses of genres, historical and geographical scenes, or in relation to the artists themselves; and as I do not partake in the rat-race view of music as a historical phenomenon, I will attempt to paint a wordscape of sorts, exploring the tenuous connections between space, time, and their distortion through the experience of music recordings. I sincerely hope you will enjoy these efforts, and that they will prompt you to read your own map. I will keep posting as the reviews come, so EYE or DIE!

To kick things off, here is a video. Treasure Island's first album will be released very soon for download, and in physical form in early 2016.